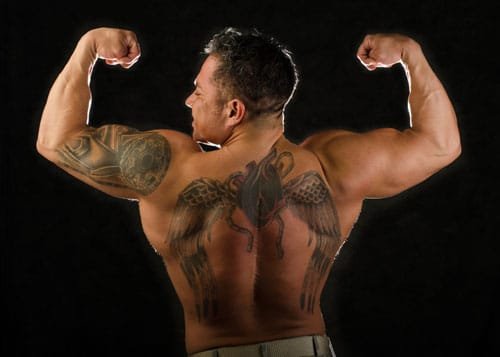 Vigorexia, also known as Adonis Syndrome or Muscular Dysmorphic Disorder, is a psychological illness characterized by constant dissatisfaction with the body, in which the person sees himself very thin and weak when in fact he is strong and has well-developed muscles, for example.

This disorder is more common in men between 18 and 35 years old and leads to exhaustive exercise, always with increased load, as well as an excessive preoccupation with food and use of anabolic agents, which can pose health risks. Learn what the effects of anabolics are on the body.

Vigorexia – When there is an obsession with the perfect body

The symptom most associated with vigorexia is dissatisfaction with the body itself. The person, despite being in shape, looks very weak and thin, considering his inadequate body.

Other symptoms of bigorexia are:

Usually the vigorous adopt a very restrictive feeding and do not consume fats, being the diet strictly directed to the consumption of foods rich in proteins, with the aim of increasing the muscle mass. Also, excessive use of anabolics and protein supplements, as well as spending hours in the gym, always increasing the load of the exercises.

People with vigorexia are always dissatisfied with the results, seeing themselves as very thin and weak, although they are solid and have very well defined and developed muscles. Therefore, vigorexia is considered a type of Obsessive Compulsive Disorder and requires treatment.

Vigorexia is a psychological disorder whose occurrence is believed to be due to some alteration related to neurotransmitters of the central nervous system since diseases such as meningitis or encephalitis preceded some cases of vigorexia.

In addition to the neurological cause, vigorexia is also associated with the adoption by many people of a body pattern and therefore end up becoming obsessed with exercise and feeding in order to reach the body they deem to be ideal. The excessive preoccupation with healthy eating, known as ortorexia, is also a psychological disorder and is characterized by little varied diet due to excessive concern with food purity and non-consumption of animal foods. Learn how to identify orthorexia.

Over time, vigorexia lead to several consequences, mainly related to the frequent and continuous use of anabolic steroid hormones and protein dietary supplements, such as kidney or liver failure, circulation problems, anxiety, and depression, as well as prostate cancer and a decrease of the testicle, which may interfere with male fertility.

It is also indicated to suspend the use of anabolic and protein supplements and to have a balanced diet and directed by a nutritionist. Also, serotonin-based medications may be recommended to control depression and anxiety in addition to other symptoms related to obsessive-compulsive behavior. Understand what serotonin is and what serotonin is for.

The practice of physical exercise should not be interrupted, however, it should be done under the guidance of a physical education professional.