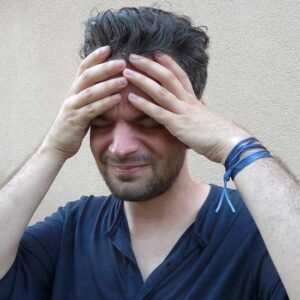 The article deals with the vegetative signs of a panic attack, as well as the symptoms that affect the mental state of a person.

A little more and a panic attack will become as big a problem for a metropolitan as chronic fatigue or stress.

From the uncontrollable irrational fear already suffered every hundredth adult (mostly from those who live in large cities).

This nervous breakdown, fortunately, is treatable.

But, in time to cope with the attack (which often rolls in a public place) you need to be able to identify the signs of a panic attack .

After you manage to cope with a wave of fear, immediately go to the doctor to prevent a recurrence of the attack.

The main symptom of a panic attack is the strongest fear

A panic attack is not in vain called this way, because its main feature is the emergence of an uncontrolled and absolutely irrational attack of fear / panic (most often – fear of death).

You can be in a familiar place, among a crowd of people, but absolutely unexpectedly you start to be afraid of something as you were never afraid of anything, although you were in more dangerous situations.

Do not be frivolous to take such a serious sign.

It is fear that has for centuries pushed people to stupid acts that cost them their lives.

If you cope with the vegetative signs of a panic attack (sweating, arrhythmia, nausea, trembling, etc.) is not so easy, then take control of an attack of irrational fear a person can do.

If you try, you can reach your mind and convince yourself that you are completely safe and there is no threat to your health or life.

If you know what exactly can cause a panic attack (for example, you suffer from claustrophobia, that’s why you always feel uncomfortable when you go down into the subway or go into the subway car), then you can avoid situations so nervous for yourself not to provoke the appearance of others signs.

If you can not determine what exactly you are so afraid of, then it’s time to go to an appointment with a therapist – only the doctor will help you discover the cause of the panic.

Panic attack is not in vain has another official name: a vegetative crisis.

This nervous disorder is accompanied by quite specific vegetative signs, the most common among which are:

It seems that everyone around you can hear how hard and fast your heart is beating.

2.Nausea and other disorders associated with the digestive tract: burning in the stomach, abdominal pain, desire to visit the toilet.

3.Sweating – either palms or whole body.

4.Trembling in the limbs, but very often a person subject to a panic attack begins to tremble all over.

5.Chill or vice versa – you are thrown into a fever.

6.Dry mouth, which can not be eliminated, even if you have water at hand.

7.Feeling of suffocation, you with great difficulty manage to inhale and exhale.

8.Tingling in the heart and / or numbness of the left side of the breast (which is why some signs of a vegetative crisis are taken for a heart attack).

9.A short rest, as if you ran at a fast pace for a long time, although you did not do anything like that.

10.Dizziness, down to loss of consciousness.

Symptoms of panic attacks that affect your mental state

Symptoms of panic attacks affecting your mental state are much less than vegetative.

Among the most pronounced doctors are called five:

1.Feeling that you are going crazy.

This is a terrible feeling, and if you do not have time to cope with it for a long time, then the human mind can really be shaken.

2.The feeling of irrationality of what is happening.

You begin to feel like the heroine of the work of Lewis Carroll.

It seems that the people around you, objects – are unreal, that the familiar place in which you are, some other.

Some people see a distorted picture, for example, as if through a magnifying glass.

It seems to you that you have left your body or are not at all here, but in some other place.

Doctors recommend that during a panic attack not only breathe properly to normalize breathing and calm your heartbeat and trembling, but also start thinking about something real and familiar, to occupy your brains with something, for example, simple math exercise or remembering once learned, then by heart rhymes.

To do this, suffering from the confusion of thoughts, is not so easy.

5. Feeling that you can commit some terrible uncontrollable act, harm yourself or others.

How often should you look for signs of a panic attack?

Alas, there is no clear answer to this question.

Someone after one single attack is never faced with such a nightmarish enemy.

And someone regularly suffers from seizures, which are repeated stably: every 1-2 months.

There are even those unfortunate people who suffer from panic attacks every other day.

In this case, I think, it’s not even necessary to remind you that you should immediately go to the doctor.

The average duration of an attack of a vegetative crisis is from 15 minutes to half an hour, although it may well last as several minutes, and several hours.

Everything is very individual and in many respects depends on whether you will be able to recognize the signs of panic in time.

What is worse is that these very signs appear completely unexpectedly and uncontrollably, and very often at an extremely inopportune moment.

If you survived the first attack of vegetative crisis, then the second one is likely to follow, because subconsciously you will expect a repetition of this nightmare and be afraid of it.

The earlier you recognize the signs of a panic attack, the easier it will be to cope with the attack
Remember, in the previous article, I told you about my girlfriend Ana, who absolutely unexpectedly fell prey to a panic attack.

Naturally, as often happens with strong people who do not like to be sick, she did not go to the doctor.

Sincerely hoping that the attack of a panic attack will never happen again, she nonetheless read many materials about signs of vegetative crisis and how to cope with the surging wave of panic.

When the episode recurred a month later, Anya was more or less ready for him, and at the appearance of the first signs (fear, rapid heartbeat, shortness of breath, trembling in the limbs), she tried to pull herself together.

She was helped by breathing exercises and active brain activity: a friend, as a pharmacist, began to recall chemical formulas and Latin terms.

When a malignant attack of panic attack could be extinguished at the root and prevent the appearance of other signs, Anya realized that such a nightmare can be repeated an unlimited number of times and who knows if it will be possible or not so easy to cope with it next time.

The friend, having reconciled, has gone to the psychotherapist, that I also advise you to do, if you regularly suffer from this misfortune.

Once these symptoms of a panic attack are not too dangerous and do not indicate that you have a vegetative crisis.

But, if you diagnosed 3-4 symptoms, then it’s time to think about what to do with this disorder and how to treat it.