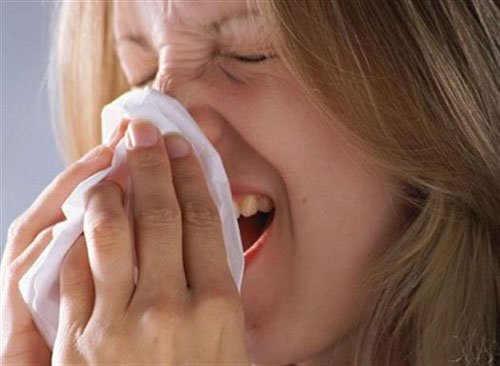 Sneezing is a way for the body to get rid of unwanted objects, such as dirt particles or other environmental irritants. A trigger to sneeze is when something on the nose tickles. Sneezing is a symptom of allergies, colds, flu and other illnesses. Some people sneeze when they are exposed to bright light and individuals with this possibly inherited condition are called.

What causes a sneeze?

Sneezing is a complex physiological process that begins when the nose encounters stimuli such as dust or smoke. This informs the part of the brain that controls sneezing that something should be expelled from the nose. The brain then sends messages to different muscle groups, causing many of the body’s muscles to become active in the process of sneezing. All of this activity goes into a single sneeze, and because so many body parts are involved, there can be several side effects.

Muscles involved in creating a sneeze

Professor and Allergist Dr. Norman Klein explains that muscles should contract in a specific order for a sneeze to occur, The muscles and their contraction order are:-

1 . Abdominal muscles
2 . Muscles of the chest
3. Diaphragm (large muscles below the lungs)
4. Muscles of the vocal cords
5. The muscles in the back of the throat
6. Muscles on the eyelids (eyes involuntarily close during a sneeze).

A strenuous cough or fit of sneezing can leave you with back spasms and upper or lower back pain and can cause injury. Vigorous sneezing not only tears all over your body, but the pressure can be so intense that it can actually cause a weakened vertebral disc to hernia. Sneezing aggravates existing musculoskeletal tension and may increase back pain, which resulted from a previous injury.

Sneezing can cause someone to twist a ligament in the lower back. Sciatica can be aggravated by sneezing, and although this is not a common occurrence, a powerful sneeze can result in a torn or even fractured muscle.

A sneeze can pull the intercostal muscle, which is a small muscle between the ribs, and this can be extremely painful. It is also very painful when the power of a sneeze causes the position of the joint where the rib meets the spine misaligned. Sneezing can cause muscle spasms and aggravate nerve entrapment, which can result in pain and discomfort.
Bones

People who suffer from osteoporosis : A disease that causes loss of bone density, which results in thinning of bone tissue and increased susceptibility to broken bones – can suffer from falls, heavy lifting, and sneezing. Blunt sneezing is particularly dangerous for the elderly and has been known to result in painful vertebral compression fractures, which is when the bones of the spine become broken due to trauma.

It is possible for a sneeze to contribute to cause a tear in the aorta. This condition is known as  & quot; aortic dissection  & quot. ; In a case report entitled “Acute Aortic Disseaction Caused by Sneeze,” scientists discuss the relationship between sneezing and aortic dissection and focus on “one patient in whom the development of aortic dissection was secondary to sneezing, although hypertension was present as a risk factor & quot;.. the results were not conclusive and the researchers were not able to say for sure whether the sneeze alone caused the rupture of the aorta