Donating blood is a very important altruistic gesture that helps save many lives because blood, today, can not be manufactured or produced through any industrial process. It only remains to use the blood of the person or of the donors to use it when the patients need it. Fortunately, Spain is a solidary country and blood donations are usually enough to cover the demand itself, even though not all people can be donors. In addition, although donating blood is very easy, donors have to take care of themselves before and after donation, especially what they eat so that the organism does not suffer from that small amount of donated blood. 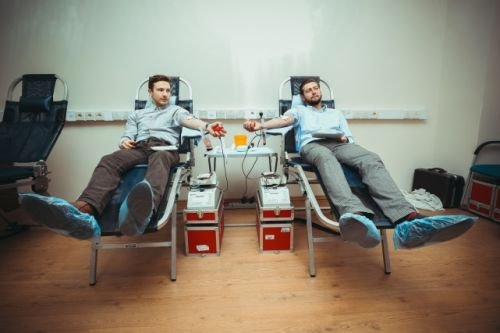 Although the amount extracted by donating blood is not high and the body can function perfectly, it is important to take care of yourself after donation and, above all, monitor the feeding so that the body does not suffer and can restore normal levels more easily.

And it is that, for example, it takes around 24 hours when the plasma returns to normal levels. The recovery of red blood cells is later, since the average time ranges between three and five weeks.

After the blood donation , the body also needs to restore its iron levels. Here the time of recovery is still longer, estimating that it takes an average of eight weeks to be at its normal level.

Also, it is convenient to know when we should not donate blood , as we tell you in this other article, and we also recommend that you consult the Requirements to donate blood .

What to eat and what not before donating blood

Taking into account the time it takes the body to recover after donating the blood as we mentioned in the previous section, it is essential to take care of food not only after the donation, but also before to go with a good base and that recovery occur normally.

The first thing to keep in mind is that the day of the donation is convenient to have breakfast . Many people go on an empty stomach, such as when they go to some types of blood tests, and it is a mistake. You can eat something, as long as it is a light and balanced breakfast .

It is also key that meals and, above all, dinner the day before donate blood are healthy. It is advisable not to eat unhealthy fats , betting on foods rich in minerals, especially iron, and vitamins such as fruits and vegetables. You can also take some protein.

To cover the possible lack of iron that can make us feel more tired, although the blood collection is minimal, the most recommended foods are:

What to eat after donating blood – the best foods

Even if you are going to donate blood with an excellent state of health and have followed the previous care, it is key to monitor what is eaten after donation so that there is no hypotension or dizziness and recover the volume of blood drawn normally. The care, in this case, should focus on what you eat and what you drink. So, this is what we recommend if you ask what is best to eat after donating blood :

What you should never eat after donating blood

It is never good for you to take a series of products after donating blood because of their little or no nutritional value and because, in addition, they can produce peaks in blood sugar levels due to their high content of sugars, which will make you not feel good. In this group of foods that are not recommended to eat after donating blood are:

With these tips on what to eat after donating blood, we hope we have helped you know what you can and can not eat after the donation. We recommend that you always consult any questions with a doctor / dietitian or the specialized people that are in the blood donation points.